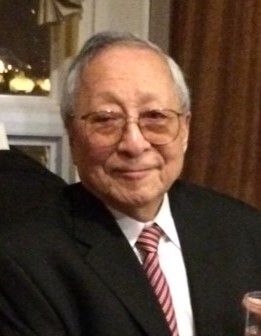 “Willie” Ta Jen Wu, 94, died peacefully at Care One of Hanover on Thanksgiving day, Thursday, November 28, 2019. Willie was the son of the late Shuchang Wu and Tian Cen.

Willie was a naval architect who graduated from Shanghai Jiao Tong University, a renowned naval architect school in Shanghai. He worked in his field for nearly 65 years, traveling the world as he was hired by various shipping companies. He was a known expert in building all types of ships, tankers, container ships, etc. He ran a shipyard in Genoa, Italy where he pioneered advanced techniques for expedited ship building. His last employer, the Overseas Shipholding Group, would have him review new blueprints before they would agree to changes in ships they would own. He was also responsible for the repair work on the Intrepid Carrier Museum in New York City.

He also loved singing in various choruses around New Jersey. Willie sang beautifully at the weddings of both of his daughters and at family celebrations. He participated in Zumba classes at the YMCA until he was 93 and was an avid ballroom dancer.

Willie will be remembered for the generous ways he took care of his family, both in the US and in China.

He is remembered and missed by his wife, Agnes (Chiang) Wu and is survived by his loving daughters, Angela Korsgaard and husband, Andrew; Rowena Wu and husband, Bill Siedler; step-daughter Peggy Tso and husband Glenn Tso; step-son Tom In and wife Abbie In; and five grandchildren Rebecca Korsgaard, Russell In, Ashley In, Jamie Tso and Elizabeth Tso. He is also survived by seven brothers and sisters living in China. There are also numerous nieces and nephews and cousins in China who contacted him by video conference prior to his passing. He was predeceased by his first wife Dora Y.H. Hsu and by his beloved step-son Keimay Yang