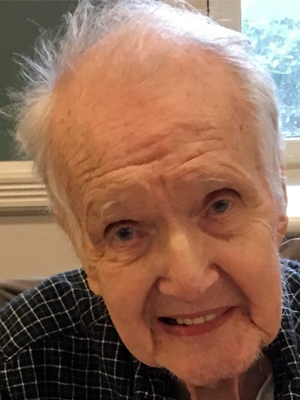 Russ was born April 6, 1927, in Ashland, WI. He was the son of the late Mr. and Mrs. Arthur and Anna (nee Bloom) McArthur. Russ served in the Navy during World War II aboard the SS Red Oak Victory. After his time in the military, he was a sailor on the Great Lakes. He worked on ore ships called the Canopus and the Tomlinson. After moving to New Jersey, he was a machinist at Imperial Machine and Tool in Cedar Grove. Russ was active in a bowling league for many years. He enjoyed model railroading, crosswords, and jigsaw puzzles. One of his favorite pastimes was watching the Packers with his family.

He was married to Ernestine MacArthur for 61 years until she passed away in 2014. He was the father to Paul and wife, Susan MacArthur, and Scott and wife, Alyson MacArthur. He is also survived by two sisters, Pat Moore and Gayle Johnson, two brothers, Richard “Dick” MacArthur and Dave MacArthur, and four grandchildren, Shawn, Stephanie, Alex and Ariel. He was predeceased by five siblings, Eunice Jones, Dorothy MacArthur, Donna Powell, Ruth MacArthur, and Lawrence “Lon” MacArthur.

In lieu of flowers, donations may be directed to the Dementia Society of America (www.dementiasociety.org/donate) or the National Veterans Foundation (https://nvf.org/veterans-donations/).