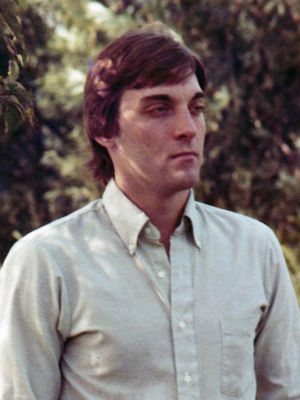 Bob is survived by his wife of 35 years, Julie (“Bij”) daughters Melinda (“Bin”) and Melissa (“Bis”), grandchildren Margot (“Bim”) and Rosalin (“Biz”). He is predeceased by his beloved Cat Nene (“Bic”). Bob’s nicknames for his family came from a base of his own name mixed with consonants from each loved one’s name–a system that was quirky and clever as he was.

Born on October 3 1960 in Summit NJ, he was the son of the late Walter and Carol Bersen. Bob had the particular distinction to be the only son in a family with three older sisters (Linda, Joyce and Carol, who survive him). Later on when he became the father of two daughters (and then grandfather to two granddaughters) he’d throw up his hands in mock exasperation and say “AH! I’m surrounded! Even our cat is a female!” In other words, he was the original Leading Man in all our lives and always will be remembered as so.

Bob and Julie met in 1984 after a romantic penpal courtship. Their first date was to see the movie Ghostbusters and to have dinner at Charlie Brown’s. At the restaurant Bob scrawled on a “leave your feedback” slip of paper that “If Julie is happy, then I am happy.” The blue eyed boy from New Jersey fell fast and hard for the shy girl from Manila, and within five months of meeting they were married.

Within a few years of their marriage Bob and Julie purchased the lakeview property where they would raise their two children and spend the next half of their lives. His children remember him for his routines: each morning he’d drink a cup of Folger’s instant coffee, put on his collared blue uniform and drive a cherry red pickup truck to work, where he would serve the United States Postal Service for 37 years. Yet out of an ordinary emerged the extraordinary: Bob’s everyday actions as a devoted husband, father and friend left a legacy of love and memories that will resonate through generations. He was truly a great man.

In his lifetime Bob was a talented computer technician, carpenter, and landscaper. He loved nature, animals, fishing, gardening, and classic rock music. He was a kind and humble man that will be remembered for his sharp wit and dry sense of humor.

“So I’ll tell you this…God does exist. But it would take a lot of math to prove it” Bob once said with a smile and a twinkle in his eye. Towards the end of his life, he told his family that he truly believed he’d one day be with God and meet them once again. Although he was deeply loved and will be painfully missed, they are comforted by this faith.