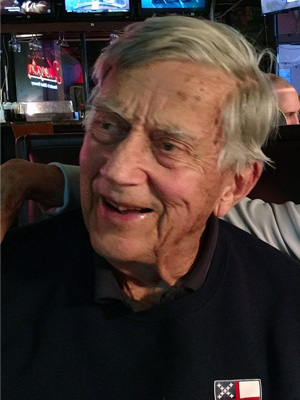 Richard (Dick) Carroll Stone Jr. was a beloved son born in Mt. Holly, NJ, on July 21, 1929 to his parents Richard Carroll Stone Sr. and Amy Eloise Stone. He was the eldest of four children. Even in his childhood, he was known for his fun loving, but rather wicked and mischievous ability to tease his younger brothers. He attended Pleasantville High School and performed the lead role in the school’s senior musical, “A Date with Judy.”

As soon as he could earn a dollar, he worked for the local paper – the Pleasantville Press – whose owner loved this loyal, hard working, accurate, organized young man, and that job seemed to keep Dick out of most trouble. In 1947, he left the small town of Linwood, NJ and travelled to Rutgers in New Brunswick for undergraduate work. He was quickly discouraged by a “less than practical” course load in mechanical engineering and was determined to enlist in the Navy from 1948-1952 where his high test scores and interest in engineering put him into radar service during the Korean War.   Upon release he earned his BS from Lehigh on the GI Bill and then, through a fellowship, an MS from Lehigh as well. He was a member of Delta Chi and was elected to the national engineering honorary societies Tau Beta Pi and Eta Kappa Nu.

In 1955 he served as the vice president of the American Institute of Electrical Engineers. He found employment starting in the summer of 1957 with Bell Laboratories in Murray Hill, NJ, and was transferred to the Naperville, IL laboratories in 1966. In 1982, he and Hattie moved to Sparta, NJ from where he worked for AT&T in Morristown, for BellCore in Basking Ridge, and finally as a consultant for Ericsson. He officially retired at the age of 58. He has two patents through Bell Labs and he was part of moving the US telephone system from human operated switching to electronic switching systems. He was in charge of installing the first electronic switching system in Coco Beach FL. One of his patents was for the Doctor Beeper, or more precisely a “Combined Telephone and Paging system wherein a Calling Party May be Connected to a Paged Party and an Attendant.” He could fix anything: TVs, washing machines, antennas, light switches, cars, as well as rigging pulley systems for garage storage.

Dick married Hattie Emma Hughes in 1955. He was introduced to Hattie courtesy of his mother, who got Dick to escort Hattie at a local beauty contest she hoped would finance a trip to California.   She didn’t win that night but has consistently said over the years, “I didn’t win, but I got something even better: Dick.” Their first date was on Steel Pier in Atlantic City where a big band played swing music.   Dick had never danced.  Hattie said, “Can we?” He said, “Sure! It doesn’t look so hard! You just move like this!” They continued dancing together for 65 years, as that date turned into a solid marriage and beautiful family. Together they had four children.

Dick was playful, teasing and imaginative with his children. Whether in his storytelling on long car trips or in sophisticated sand boats for babies to sit in or magnificent ball shoots made out of huge mounds of sand where tunnels and bridges and curvy mountain roads were expertly crafted, or his hobbies with model trains, his imagination loved to build stuff and play. The time he spent with his children building model electric train sets, block building, tinker toys, legos, Lincoln logs and Electro sets will never be forgotten. He was a patient ski instructor, swimming instructor, tent putter upper, fire starter and easy to follow math instructor. Every Christmas he hung bells with invisible thread so the children could not get to the tree before morning. Every Easter he tried their patience by setting out clues with solutions that eventually led to their Easter baskets.   The little league he coached required bird-named teams and solid color baseball caps: orange hatted Orioles, red capped Cardinals, blue topped Jays. His team was the Vultures, and they threatened (nobody) in black.

The family took camping trips where Dick would make sure everyone was busy and active – they had a wood paneled station wagon complete with sleeping bags, legos and books in the back (before seat belts), a pop up camper, a canoe and a sailboat on every trip. His playful imagination was an integral part of his four children’s lives and his grandchildren’s lives as well as many furry dogs and granddogs who he would inevitably find ways to tease. When Dick was suffering in the last days, the granddog would bring out a teasing growl and a wicked smile.

Dick was the consummate churchman – not a year went by during childhood and teen years that the family did not go to Church – all of them – even with growing active boys who didn’t want to sit in a pew. He served faithfully as Sunday school teacher, communion steward and senior warden, many years as treasurer, biblical scholar, and fully participating contributor. Dick and Hattie have been busy and fully participating members at St. Mary’s in Sparta since 1982. In Glen Ellyn, IL, before they arrived in Sparta NJ,  they were members for 15 years at St. Mark’s Church. Dick and Hattie hosted mission projects including partnering with a young priest in India helping to raise funds to establish a school for orphan girls. He and Hattie hosted an Iranian refugee mother and her two boys for many months while they found a place to live. They consistently staffed Vacation Bible camp until 2 years ago.

Dick and Hattie have traveled the world together. She’d often have the idea, like on their first date, and he’d say “Let’s go!”, as on their first date.   To the Egyptian pyramids, Death Valley backpacking, Colorado white water rafting, Ireland, Colorado skiing, Japan or Portugal back roads and farms, they have hiked and explored the world. Dick was a “let’s do it” guy who was known to say, “You can rest when you’re six feet under!” As he aged, his family took him on many hikes which he probably shouldn’t have taken but he was always game. He loved opera, going to the symphony and going to the theater. In his last days, when he could barely stand up and was not quite in his right mind, he looked up and said, “What are we doing today? Don’t we have tickets to the theater?”

Dick is predeceased by his mother, Amy Eloise Stone and his father, Richard Carroll Stone Sr. and a brother, Robert Stone. He is survived by his sister, Patricia Bright of West Virginia and brother, Daniel Ruben Stone (m. Ruth Ellen Stone) of Indiana. He is survived by his four children,  Richard Carroll Stone III, Kathleen Mildred Stone, James Hughes Stone (m. Kim Schad) and Christopher Lewis Stone (m. Kara Baschnagel Stone), their spouses and Dick and Hattie’s grandchildren – Michael Hughes Riddleberger, Jonathan Richard Riddleberger, Nathan Schad Stone, Fionnuala Pearl Stone, Ian Schad Stone, Theodora Kathleen Stone, Devina Skye Stone and Arlo Stone and two loved step grandchildren Logic and Skylar Chernago. We are grieving his loss and we are deeply grateful and moved by his significant love in our lives. We miss his boundless humility – he sometimes seemed almost comically unaware that so many people adored him and valued his loyalty, his work ethic, his gentleness and his friendly chuckle. Rest in Peace, Dick, Dad, Grandpa, Pops and Poppy Dick.  We love you!

Due to Covid 19,  a memorial service will be held sometime in the future, most likely online. This page will be updated with details when they are ready.