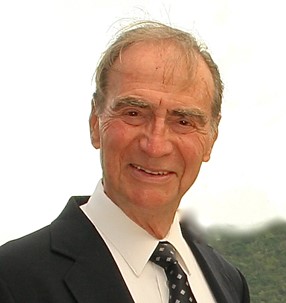 Click here to view the Funeral Service live stream at 3pm on Wed, 2/10

Richard was known to his wife, friends, and co-workers as Dick, his grandchildren as Poppy, and great-grandchildren as The Great Poppy.  He is remembered for his genuine smile and big heart.  A quiet patriarch, filled with love, devotion, wisdom, and kindness, he remained active and full of optimism and curiosity until his final days.

Dick was born in 1926 to John Jacob Kiss and Emily Louise Elser in Newark, New Jersey.  At a young age, he learned to become an amateur magician which enabled him later in life to delight in entertaining his children.  He attended West Side High School where he played left tackle on the football team.

He enlisted in the Navy in 1944 during World War II at the age of 17 intending to become a pilot.  Already fully supplied with pilots by this time, the Navy enrolled Dick in the V-12 Navy College Training Program and he was commissioned as an Ensign and served aboard the USS Gherardi.  Following his Navy service, Dick finished his engineering studies, under the GI Bill at Brown University, earning a BS degree in Mechanical Engineering.  He went on to earn a Master’s Degree in Industrial Engineering at the Newark College of Engineering (NJIT) where he later became an adjunct professor.

As the first in his family to attain a college degree, Dick started his career as an engineer for Wright Aeronautical before joining Westinghouse Electric Lighting (later Phillips) where he sustained a career for over 30 years.  Dick held various positions in manufacturing and quality control and traveled internationally assisting in foreign operations, especially in the Caribbean.  He was known among co-workers as smart, congenial with a good sense of humor; giving credit to others for what had been accomplished.

Dick was adept at making friends and even better at keeping them.  Through his boyhood friends, he met the love of his life, Helen, at a beach party in Avon, New Jersey.  They were married in 1953 and, raised their three children; Wendy, Rick, and Bob in Verona, New Jersey.  As residents there for over 50 years, Dick and Helen were members of the First Congregational Church of Verona.  They often filled the home with friends and laughter.

With his young family, Dick enjoyed camping and the water, often taking them boating on Lake Hopatcong and Greenwood Lake in New Jersey.  Family vacations were fully provisioned camping trips to Cape Cod, New Hampshire, or Myrtle Beach.  He lived by the motto “Leave the campsite in better condition than you found it.”

Later in retirement, Dick and Helen were able to continue their time on the boat and the beach while at their home in Manahawkin, New Jersey, where they managed to entertain their ever-growing family.  Poppy took quiet pride in his family’s growth.  He was a frequent and calm presence at the grandchildren’s sporting activities.

Dick and Helen later moved to Cedar Crest Senior Living in Pompton Plains, New Jersey, where they resided together until his passing.  They both continued to make new friends remaining involved with bridge, bocce and horse shoes.

He is predeceased by his daughter Wendy Hamilton, and his brother and his wife Jack and Gladys Kiss, and his sister-in-law Anne Lee.

In lieu of flowers, the family asks that any charitable donations be made to The Cedar Crest Resident Care Fund, 1 Cedar Crest Village Drive, Pompton Plains, NJ 07444; Attn: Philanthropy Department