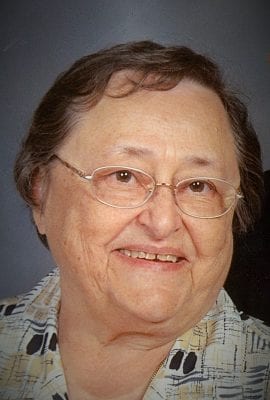 Millie A. Connelly passed away at home in Springfield, on September 29, 2020. She was born December 1, 1931 to John and Zuzanna Kuchta and was the only sister to John and Paul, both of whom predeceased her. For most of her life she lived in Summit. Millie met her husband, Charles T. Connelly, when they were 7 years old as he was “the boy upstairs”, and they were married November 29, 1952. Together they raised 4 children, Charles Jr., who passed away on July 23, 2002, Frances Rice (Vaughn), Susan Colombo (Dominick), and George Connelly (Beth). Her grandchildren, Clayton Reilly, Benjamin Frazier, Marie Colombo, Rebecca Connelly, and Rachel Frazier, and great-granddaughter, Abigail, were a frequent topic of conversation and pictures were readily available to share as she was proud of each of them.

After graduating from Summit High School in 1950, she was employed by Lord & Taylor and as a secretary at Bell Laboratories until becoming a mother. Millie held many volunteer and paid jobs through the years as a Cub Scout den mother, Jefferson School PTA officer, crossing guard, office manager for Charles T. Connelly Plumbing, Overlook Hospital Volunteer, and in the Overlook Hospital pre-admissions department. She was known for her chocolate chip cookies and apple pies, which were frequent gifts to friends and family.

Millie’s faith was extremely important to her.  She was a life-long member of St. John’s Lutheran Church in Summit, having been baptized on Christmas Day, 1931 and confirmed by Pastor Hinman on March 25, 1945. She sang in the Junior and Adult Choirs and was still singing in her last days. At her passing, she was the oldest member who had been baptized at St. John’s.

The family is grateful for the doctors and nurses of Overlook Hospital and Summit Medical Group, the Center for Hope Hospice, as well as Mark and Jane from Amada Senior Care of Cranford who lovingly cared for her in her last days. A special thank you is also extended to Pastors Gladys Moore and Blake Scalet of St. John’s, who faithfully cared for her in and out of the hospital.