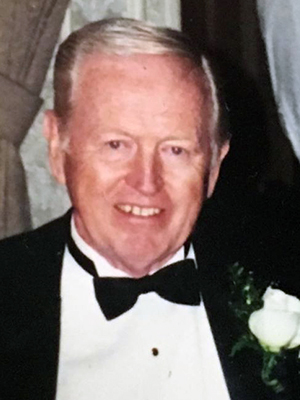 Before retiring, Michael served as a an officer for the Essex County Sheriff’s Department for more than 30 years. He also worked part-time in the evenings at the Star-Ledger newspaper in Newark from the late 1960s until the early 2000s.

He is a graduate of St. Benedict’s Prep, in Newark, NJ, where he excelled at track. In 1948, he competed at the Penn Relays in Philadelphia and the high school national indoor championships at Madison Square Garden, winning a state parochial championship as a member of the 4 X 400 relay team.

He went on to serve honorably in the United States Marine Corps during the Korean War, and prior to his role as a sheriff’s officer served as a fireman in Essex County in the early 1960s.

He was the beloved and loyal husband of 61 years to Florence Flynn (nee Zimmer) and the beloved father of Michael, Patricia, Nancy, and Thomas Flynn. He was also the loving grandfather of John, Elizabeth, and Thomas Flynn, Ned and Owen Weitzman, Luke and Patrick Kelly, and Charles, Neal, and Jack Flynn. Spending time with his family at annual summer vacations in Sunset Beach, North Carolina was among his greatest joys.

He was born on July 15, 1931 in Newark, NJ, and was one of four children born to John Joseph Flynn and Mary Agnes Flynn (nee Dunn). He was the brother of Mary Therese, Catherine Frances, and Patricia Ann. He is predeceased by Mary Therese.