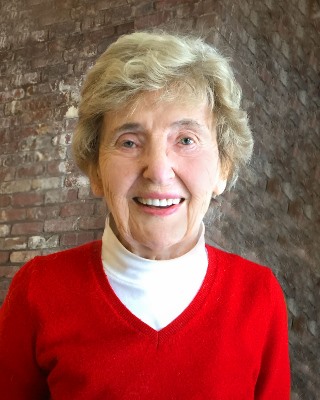 June B. Rohn, of Madison, New Jersey and Longboat Key, Florida, died on October 20, 2019 after a brief illness. She was predeceased by her loving husband of 70 years, Fred H. Rohn.

Born June Barbara Chadwick on July 17, 1925 to Walter and Evelyn Chadwick, she was raised in Elizabeth and Hillside, New Jersey. June graduated from Hillside High School in 1943 and attended Drake Business College in Elizabeth. After graduation from Drake, she worked as a secretary for a Newark attorney. In 1948, June married her high school sweetheart, Fred. They soon moved to Madison where they raised four children.

June grew up in an exceptionally close family surrounded by aunts, uncles and cousins. She had a special bond with her grandmother, Nana. As a young girl June shared many adventures with her brother, Walter, and cousin, Calvin. As big sister to Judy she became “the boss,” and role model.

June’s proudest achievement was her family, which, during her lifetime grew to three generations. She made each feel special and took great joy and interest in seeing her nine grandchildren and two great grandchildren grow. An expert knitter, June made not one, but two afghans for each of her grandchildren in colors they selected themselves. She also enjoyed solving Sudoku puzzles, reading the newspaper, playing the piano, and keeping up to date with her family.

June was the love of her family’s life and was especially adored by her grandchildren. Their summer visits to the Jersey shore promised early morning sunrises, card games, ping pong, demonstrations on how to ride a two-wheeler, and dinners of grilled chicken and burgers, corn on the cob and sliced tomatoes.

Throughout their married life, June and Fred placed a high priority on friendship, always looking for opportunities to share family vacations, barbecues and game days. Their friendship with Jane and Warren Totten has spanned three generations. With the Tottens, Hoffmans, Broekers and Davises they sailed, swam and partied in Lavallette and Mantoloking.

June had a lifelong interest in psychology, taking evening courses while raising her children, always trying to understand the inner workings of human behavior. She was involved in many volunteer activities while her children were in school and later served as Vice President of the Gem Star Foundation, directing charitable funds to education, science and the arts.

Visiting hours will be from 2-5 p.m. on Sunday, October 27, at the Wm. A. Bradley & Son Funeral Home, 345 Main Street in Chatham, New Jersey, and a memorial service will be held on Monday, October 28 at 11:00 AM at the Restland Chapel in East Hanover, New Jersey. For more information please visit www.BradleyFuneralHomes.com. Contributions may be made in June’s honor to FM Kirby Children’s Center, Madison Area YMCA, in Madison, NJ.