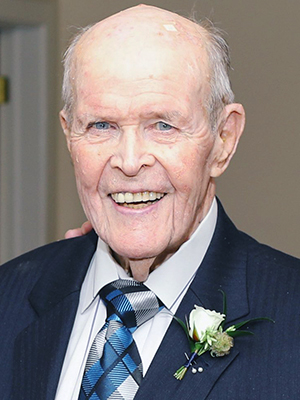 Joseph was born on April 11, 1923 in Philadelphia, PA. He was the son of the late James and Ann (nee Wynn) Riley. He was a 1941 graduate of Northeast Catholic High School, Philadelphia, PA and a 1947 graduate of Massachusetts Institute of Technology, Cambridge, MA with a BS in Electrical Engineering. Joe served in the United States Navy during World War II from 1943-1946.

He married Bernadine Goldate Riley on May 14, 1949, and recently celebrated 70 years of wedded bliss.

Joseph worked within the telecommunications industry starting in 1941 as an installer with Western Electric. Following multiple managerial positions, he completed his career as Vice President of Human Resources for Bell Atlantic, retiring in 1986.

Joseph volunteered throughout his life including the National Executive Service Corps, Emeritus Teacher Program, Washington, DC, and volunteer staff of The House of Representatives. He was involved with the Boy Scouts of America, and recipient of the Silver Beaver Award. He was on the board of directors for United Way, and on the pension board of the Laity Committee of The Archdiocese of Newark.