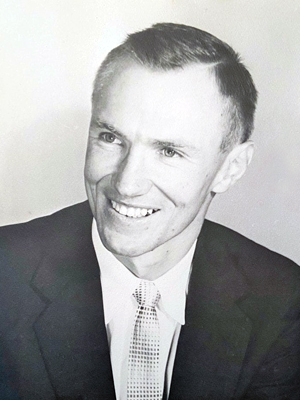 Born in Atlantic City, he lived in Shrewsbury and Neptune before settling in Freehold.

John was a Business & Public Administration Major at the University of Maryland and graduated with a BS in 1951.  He also was a member of his alma mater’s alumni association.

A veteran of the US Army, John was in the ROTC program at Maryland.  He served in active duty from 1951-1953 and was honorably discharged from the Army reserves in 1960.

He was the chief accountant in the business office at Brookdale Community College, where he was a part of the staff for over 25 years, retiring in 1989.  After retiring, he would volunteer at his local library assisting people with their taxes at “tax time”.

John had many varied interests.  He enjoyed traveling and after retiring he and his wife would R/V travel.  He also enjoyed NY Times crossword puzzles, gardening and World War II history.  He loved reading and working on his cars.  He was especially handy around the house and was always willing to give his time to anyone who needed help.  He also had an avid interest in the stock market, buying and selling stocks.

Funeral Home:
Wm. A. Bradley & Son Funeral Home Funeral:
funeral services are private Memorial Gifts:
Those who wish may contribute in his memory to either the Alzheimer’s Association at www.alz.org or St. Barnabas Hospital at www.rwjbh.org.