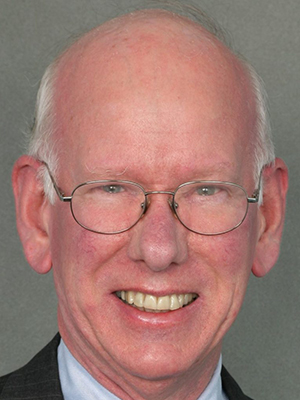 John Ashmead Robb, of Summit, New Jersey, died peacefully with his family by his side on August 26, 2019. Over the past seven years, he fought valiant battles against lung cancer, Parkinson’s Disease, and ultimately pneumonia. He did so with his customary positive, can-do spirit and determination.

John was born July 1, 1941, at Mountainside Hospital in Glen Ridge, New Jersey, to Lehman Ashmead Robb and Mary Montgomery Robb. After three years in Essex Fells, he spent the remainder of his childhood in Montclair, NJ. During those years, he was an active volunteer at St. John’s Episcopal Church and with the Boy Scouts, ultimately achieving the rank of Eagle Scout. After graduating from Montclair College High School in the Class of 1959, John attended Trinity College (Class of 1963) and Northwestern University, before graduating from New York University in 1969. His professional accomplishments spanned a broad range of industries from retail (Sears, Roebuck and Co. management training program) to credit cards (American Express) to private banking (Fidelity Union, Manufacturers Hanover, Chemical Bank, and ultimately retiring from Chase Manhattan). It was in residential real estate (Prudential New Jersey Properties and most recently, Lois Schneider Realtor) where John found his true calling — many of his clients credit him with helping them identify their respective communities where they have built lasting friendships.

John married Margaret (Margy) Carpenter Young on September 7, 1968, and moved to Summit in 1971, where they proudly raised their three children. In addition to being an enthusiastic fan of his children’s sporting events, John was a Summit Soccer Club coach, a Clearwater Swim Club volunteer, and a representative in the Town & Country Swim League.  Often called the “unofficial mayor of Summit” because of his gregarious nature, John had a cheerful disposition and brought a bright light with him wherever he went. He seemed to know everyone and displayed a genuine interest in whomever he met, remembering not just names and faces, but details of people’s lives. His community was very important to him, and he served as a trustee of Reeves-Reed Arboretum and a board member of Summit Area Development Corporation. John had an active connection to Calvary Church for 50 years, as a devoted parishioner, usher, vestry member and Junior Warden. An avid and inquisitive international traveler, John joined the Calvary groups on many of their holy pilgrimage exploration journeys.

Throughout life, John loved traveling, Broadway musicals, dancing, gardening, history, British royalty, genealogy, reading, laughing, and most importantly, his family and friends. John brought humor and laughter to almost every situation and had a way of putting both old friends and new acquaintances at ease when he joined a conversation. Long before Google, there was John Robb, who served as a walking encyclopedia, with a wealth of knowledge on all kinds of subjects.

John is survived by his three loving children: Margaret (Megan) Robb, of Chicago, IL; William (Bill) Robb and his wife Amy of Summit; Susan Macdonald and her husband Frank of Braintree, MA; and five adoring grandchildren: Maddie, Alex, and Thomas Robb; and Martha and Frannie Macdonald. John was predeceased by his parents, his brother James M. Robb, his sister Mary Lee Seifert, and his loving wife of 37 years Margaret C. Robb.