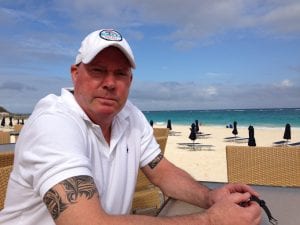 John Robert English, born April 30, 1958, passed away peacefully on June 15, 2020, at the age of 62. The love of his life and wife of 41 years, Helen Cuff English, was at his side, where she had faithfully been throughout his long illness.

Born in Evanston, Ill., John first moved to Chatham, NJ, in fifth grade. In Mr. Ames’ class, he met his future wife. John later moved back to Illinois and then back to NJ, where he attended Chatham High School and reunited with Helen. The friends he made in Chatham remained his pals, confidants and softball teammates throughout his life.

He spent most of his career in the printing business, first with Penny Press in Madison and Morristown, and in recent years with Sun Graphics. But in the aftermath of the 9/11 attacks, John worked for FEMA in lower Manhattan, assisting with the cleanup. It was a role he felt privileged to have.

To know John was to love John. He was highly regarded by everyone he met, and as his family grew over the years, his role as quiet patriarch grew, too. His children were his greatest treasure, and he loved nothing more than to spend an afternoon with them at his shore house in Belmar, NJ. He’d regale them with stories of his childhood, tales of the latest happenings in sports, and even pepper in some old TV show highlights. He made sure they knew his guiding principle: “Either your family is the most important thing in your life, or it isn’t.”

As fathers go, John was one of the best. But in his later years, he cherished the role of grandfather even more. His four granddaughters were his pride and joy, and he was the quintessential “girl granddad.” If they had a favorite movie, he’d get the DVD and watch on his own so he could better discuss it on the next visit. He’d share his love of sports, sending them top-notch equipment for their latest season and outfitting them with jerseys and hats for both Super Bowl teams. When he learned Juliet’s favorite Yankee was Edwin Encarnacion, he somehow tracked down an extra, extra small #30 jersey.

We lost John — Johnny, Dad, Robert, Grandpa, Top Dog, occasionally even Papa Johnny or Boppy — far too soon. But his loving family and the countless friends and neighbors who knew and loved John are his legacy.

He’s survived by so many who will miss him dearly: his beloved wife, Helen; son Jason and his wife, Ellen; daughter Karen Detjen and her husband, Keith; and his four loving granddaughters, Charlotte, Katherine, Juliet, and Penelope.

The family welcomes visitors from 12 to 2pm on Friday, June 19, at Bradley & Son Funeral Home at 345 Main Street, Chatham, NJ. A brief prayer service will be held at 1:30, followed by burial of his ashes at Fair Mount Cemetery, also in Chatham.

Knowing the difficulties of this time, the service and burial will be available to stream live at home at this link. The family understands many who wish to give their condolences may be unable to attend, and in lieu of flowers, ask that donations in John’s memory be made to the Make-A-Wish Foundation (NJ.wish.org).