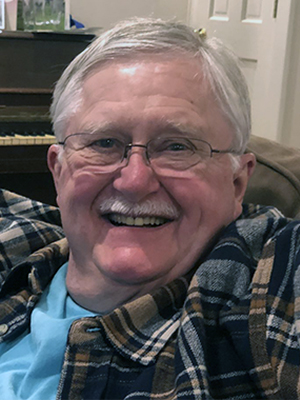 Born on May 12, 1949 in Toledo, OH to John Knisely Mell and Elizabeth “Bette” Galliers Mell, John lived outside Detroit, MI and in Bellevue, WA before moving to Summit in 1960 at the age of 10. John attended Washington Elementary School, Summit Junior High School and Summit High School from where he graduated in 1967. An avid tennis player, John played on the SHS Hilltopper tennis team and taught lessons at Clover Hill Swimming Club.

John first met his Annie (Anne Scrymser Milbank) when she moved to Summit from Dallas in 1964 although the two did not start seriously dating until they were in college. Ms. Johnson must have had a vision of the future when she asked John to tutor Anne in high school chemistry years earlier. Engaged during their senior year of college, Anne and John were married in May 1972 at Christ Church in Short Hills, NJ.

John attended Brown University in Providence, RI graduating in 1971 with a B.A. in American History. He entered Brown as part of the Navy ROTC program and while at Brown, he became a member of Phi Delta Beta Fraternity. Commissioned into the US Navy in June 1971, John was a plank owner on the USS Spartanburg County (LST-1192), commissioned September 1, 1971 in Long Beach, CA. During his service, John was stationed at NAB-Little Creek in Virginia until being honorably discharged as a First Lieutenant in November 1975. John received his MBA in Finance from the University of Michigan in 1977 and remained an avid Wolverine fan throughout the rest of his life. GO BLUE!

Returning to Summit in 1977, Anne and John bought their first home on Harvey Drive and over the next seven years welcomed 3 children (Meredith, John III, and Caitlin) and their first of four labs, Clancy.  It was their move across town to the fixer upper on Valley View Avenue that gave John decades of home improvement projects to keep him busy and birthed the GSA holiday party that brought friends together annually for 34 years.

Commuting to NYC for the majority of his career, John worked in international finance at Bristol-Myers Squibb and Citibank, consulting at Resources Global and as chief administrative officer at MLV before retiring in 2014. John’s favorite job, however, was his retirement job at SAGE’s Furniture Restoration Workshop where he spent his mornings volunteering alongside an exceptional group of new friends caning, rushing and repairing furniture.

John was a lifelong garage sale-r, a hobby he enjoyed with his younger brother, Ed.  John loved to hunt for deals or hidden gems and he especially loved buying things that he didn’t need currently but might need at some point in the future.  He was a self-taught DIYer who tackled legendary home improvement projects and maintained a workshop overfilled with tools. He was a voracious reader of US History non-fiction during his commute and whenever he could find a quiet minute.  An avid genealogist, John enjoyed researching and meeting far off relatives across the country. He had the gift of gab and never met a stranger.

John’s greatest joy was his family. Married for more than 47 years, John adored Anne and loved their post-retirement travels, which he meticulously planned. He cherished spending time with his children, their spouses, and his 7 grandchildren, especially during the annual family reunion week at Twin Lakes Village in New Hampshire. Jeep, as his grandkids called him, relished in passing along his love of carpentry, swimming in lakes and appreciating the simple things including jumping in puddles, eating donuts, mowing the lawn and the fun of setting mouse traps.

John is survived by his wife, Anne Milbank Mell; his children, Meredith Dunn (Blair), John Mell III (Betsy), and Caitlin Copestick (Matt); his grandchildren, Marshall, Graham and Wyatt Dunn, Scarlett and Mazie Mell, and Charlotte and Evelyn Copestick; his mother, Bette Mell; his brother, Ed Mell (Libby) and his lab, Sadie. He is preceded in death by his father, John Knisely Mell.

Funeral Home:
Bradley, Brough & Dangler Funeral Home Funeral:
A celebration of John’s life will be held at Calvary Episcopal Church, 31 Woodland Ave, Summit on Saturday, December 14th at 11am. Committal:
A private interment will take place at Green-Wood Cemetery, Brooklyn. Memorial Gifts:
In lieu of flowers, please consider a donation to Sage Eldercare (www.sageeldercare.org). All donations made in memory of John Mell will be directed to the Furniture Restoration Workshop, the place John volunteered daily the last 4 years.

Do NOT follow this link or you will be banned from the site!