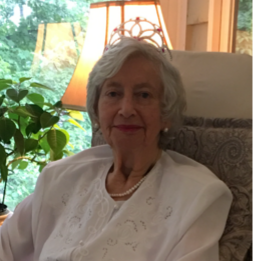 Joan Wold Horak, 93 of Chatham, passed away peacefully in her home surrounded by friends on February 8, 2020. Joan was born on October 3, 1926 in Newark, New Jersey to Charles and Florence (nee Stolz) Wold.  She was a 1943 graduate of Barringer High School where she was a member of the National Honor Society.  Joan went on to study music at The Juilliard School in NYC.  She mastered playing both the Tuba and Piano.  Joan met her husband Emil, who was an accomplished  Violin and Viola player while they were both performing in the Newark civic symphony. They were married in 1953 and lived in Union, New Jersey before settling in Chatham Township more than 40 years ago.  Joan dedicated 30 years of service to Clara Maass Medical Center in Belleville, New Jersey as a Medical Staff Coordinator, a newly created position at that time and since then has been adopted by many hospitals. Joan was a former member of Zion Lutheran Church in Clark, New Jersey where she was active in the Ladies Auxiliary. More recently, she was a devoted member of Gloria Dei Lutheran Church in Chatham, New Jersey and sang with the choir.  She and Emil loved to travel especially to the US National Parks.  They also enjoyed entertaining on the weekends in their Harvey Cedars home on Long Beach Island.

Joan was an avid reader, a bird watcher, she enjoyed gardening and was a true lover of nature.  She fed all her furry friends who visited the backyard and several beagles and rescue greyhounds were welcomed into her home over the years.  She also had the distinction of being a life member of the Sons of Norway joining in 1947.

Joan is predeceased by her loving husband of 52 years Emil I. Horak, sister Diane Erstad and niece Carol Frame.  She is survived by family members including nephews Bruce Tweedy, James and John Erstad, cousins Linden and Jonathan Thatcher and many dear friends and neighbors.

Due to the current pandemic, the Celebration of Joan’s life will be private. Those who wish to make a contribution in memory of Joan may do so, to Gloria Dei Lutheran Church or a charity of your choice.

Funeral Home:
Wm. A. Bradley & Son Funeral Home Funeral:
A private memorial service will be held for Joan for family and close friends. Memorial Gifts:
Contributions in memory of Joan may be made to Gloria Dei Lutheran Church, at 300 Shunpike Road in Chatham, New Jersey 07928