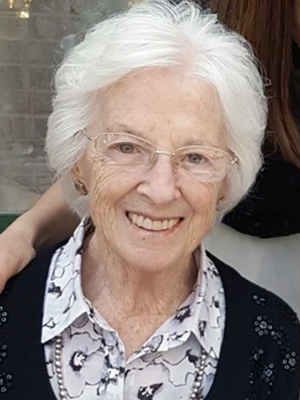 On May 19, 2020, Joan M. Hayward passed away peaceful in her home surrounded by family members. She was 87.

She was born in the Bronx, NY on Oct. 3, 1932 along with her twin brother John J. Curry Jr. Her parents were John J. Curry Sr. and Mary Walsh Curry. She was the youngest of 7, coming after Veronica, Donald, Dorothea, Gerald, and Clare. They were all proud of their Irish heritage and being from the Bronx.

She attended OLM in the Bronx for grade school and went to Mount St. Ursula in the Bronx for high school. She made many great lifelong friends at “the Mount” whom she was in contact and visited with all her life.

She married Richard E. Hayward on April 7, 1956 in the Bronx. Soon after, our father was stationed in Germany for 3 years with the Army. It was that experience where they developed their love of travel which in later years they would share and encourage their sons to do the same.

Starting in 1964 they had three sons: Richard, Andrew, and Mark. They lost Andrew as a baby.

In November 1970, the family relocated to Whippany, NJ where Richard and Joan lived until they passed; raising the family in the same home for almost 50.

She was a loving wife and mother. Raising Richard and Mark before going back to work when Mark was in high School.

She kept in close contact with her siblings often seeing Veronica and Dorothea. She had many friends from the Whippany community and the Bronx.

She was an active member of the OLM church and community in Whippany for nearly 50 years. She was active in the OLM PTA, Eucharistic minister, many church functions, school functions, son’s sports activities, summer’s of travel and NJ Shore weeks and a lifetime of other interests and activities.

Ultimately, our parents were inseparable, always interested in new things, travel, being with friends and always loving and being with their family. She was the quiet force and backbone of the family.  She will be forever remembered and loved and sorely missed.

Joan is pre-deceased by her husband of 58 years, Richard Hayward. she is survived by her two loving sons, Richard and his wife, Elaine and her daughter, Katie, Mark and his wife Sarah.

In lieu of flowers, donations in Joan’s name may be made to: Academy of Mount St. Ursula, c/o Development Office, Bedford Park Blvd., Bronx, NY 10458.