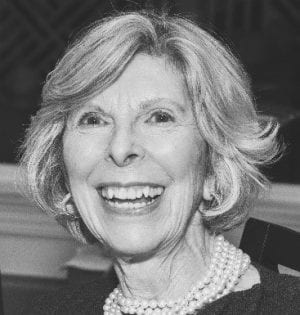 Jean was born in East Orange on September 29, 1928 to Loraine K. and J. Harold Wallwork.   Her early childhood was spent in Belleville and Ocean Grove, and her later childhood in Montclair and Sea Girt.  Upon her graduation from Montclair High School, she attended Hood College in Md. and was a 1949 graduate of the Berkeley School of Secretarial Training in East Orange.  She met her husband, Matthias Sheeleigh, in New York City, and they married in 1954 at St. Luke’s Episcopal Church in Montclair.  They lived together in Montclair, Chatham, and Glen View, Ill, before settling in Summit in 1960, where they stayed for 58 years.  The last two years of her life were spent at Lantern Hill in New Providence.

Jean and her husband Matt travelled throughout their lives together, covering all of the countries of Europe, returning to several multiple times.  However, her first and best love was for this country, where they travelled extensively. She was an active member of the Republican party, and regularly worked political campaigns. This included helping her brother, Jim Wallwork, a 4-term NJ senator. She also saw it as her civic duty to work at the polls every election day and did so throughout most of her life.

An avid American antique collector and an enthusiastic reader of American history, Jean filled their beautiful home with carefully selected pieces. A passionate supporter of the Children’s Tumor Foundation, she was an uncommonly good woman, and devoted wife and mother, who spent much of her time supporting, encouraging, and taking tremendous pride in all of her family’s accomplishments.

Funeral Home:
Wm. A. Bradley & Son Funeral Home Funeral:
Private funeral services will be held at the First Presbyterian Church of New Vernon on September 18th Committal:
She will be interred next to her husband and parents at Hilltop Cemetery in Mendham following the private service Memorial Gifts:
In lieu of flowers, the family asks that any donations be directed to the Children’s Tumor Foundation https://www.ctf.org/ in her memory