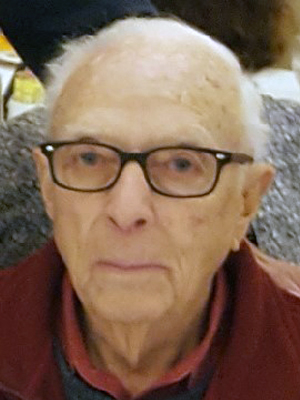 Born in Jersey City, NJ, Mr. Boetsch grew up in West Orange before moving to Union in 1956.

Mr. Boetsch graduated from Our Lady of the Valley High School, Orange, NJ and attended Seton Hall University, graduating in 1950 with a Bachelor of Science Degree in Business Administration.

During the Korean War, after completing infantry training at Fort Dix in 1951, Mr. Boetsch was transferred to the Army Corps of Engineers serving at the Engineer School at Fort Belvoir, Va., until his discharge in 1953. Mr. Boetsch was a member of the Kenilworth Post #470 American Legions for over 50 years.

Upon his discharge from the Corps of Engineers in 1953, Mr. Boetsch resumed is activities with the New Jersey Civil Air Patrol attaining the rank of 2nd Lt, commanding Office of Essex Squadron 221-1, with headquarters located in Bloomfield, NJ, and flight operations out of Hanover Airport in East Hanover, NJ.

He was a communicant of St. Michael’s Roman Catholic Church in Union for over 50 years, during which time he served as both, Lector and Minister of the Eucharistic. His involvement in parish work over the 50 years included, service as a Parish Trustee, member of the Parish Council, and on both the Finance and Liturgy committees.

During his more than 19 years employment in lower Manhattan, Mr. Boetsch was a daily Communicant at Our Lady of Victory Church on William Street in lower Manhattan. He was active as both an Altar Server and Lector at the 7:15 daily Mass. He also served as Parish Trustee under the then Pastor Msgr. Gustav Schultheis for three years.

With approval from the Bishops of both the New York and Newark Dioceses, Mr. Boetsch served as the first Extraordinary Minister of the Eucharist at Our Lady of Victory Church until his employer re-located to New Jersey in early 1980’s.

He was a member of Union Council $4504 Knights of Columbus and the John F. Kennedy, 4th Degree General Assembly. He also served as a member of the Columbian Swim Club Board of Directors.

Mr. Boetsch was employed by American International Group in 1977, retiring in 1993 from AIG Global Services in Livingston. Following his retirement in 1993, Mr. Boetsch remained with AIG for 22 years as a part time consultant, until his resignation in June 2016.