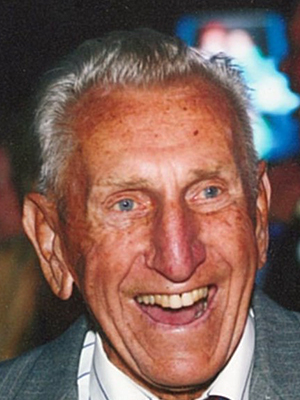 Born in Maplewood, NJ. George married Mary Ringwood in January 1950 and had 4 children: Barbara, James, George Jr, and Richard. He is also survived by 10 grandchildren and 7 great-grandchildren.

George played a great deal of baseball as a teenager in the Maplewood recreation leagues. He graduated from Columbia H.S. in Maplewood and went into the Navy in 1944. After basic training, he was assigned to the naval school in Bainbridge, MD, and was then posted overseas in the Philippines. He piloted a 50 ft landing craft boat in Manila Bay. During his service in the Philippines, George and three other men saved the lives of 11 men in a typhoon and was recommended for the highest US Naval life-saving award.

After naval service he started out as a carpenter. Then went to Newark College of Engineering in architecture and surveying. George became a construction superintendent and onsite engineer working on buildings such as the Arthur L. Johnson H.S. in Clark, New Providence H.S., N.P, Country Day School in Short Hills, Summit H.S., Summit, Union Jr. College, Cranford Brearly H.S., Cranford, and many others.

George had his own construction company for 11 years. He then became the superintendent of maintenance for the Summit Board of Education for 16 years. After retirement spent 9+ years volunteering at the Lyons VA hospital helping veterans in wood shop one day a week. He was also a part owner of a minor league baseball team in Salt Lake City, Utah. Throughout retirement he enjoyed wood working, crafts and traveling to spend time with family.