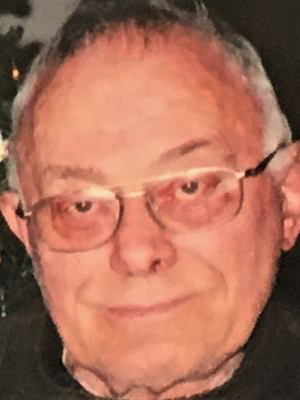 Ernest John Gonczlik, 89 passed away Monday, September 30, 2019 in Belmar, NJ. Ernest was born November 19, 1929 to John and Irene Gonczlik in Clark, New Jersey, the older of two children. He graduated from Johnathan Dayton Regional High School in 1948. He was known to most as Ernie.

Ernie then attended Lehigh University where he earned a Bachelor’s of Science Degree in Mechanical Engineering in 1952. While attending Lehigh, he was a Varsity Letterman on the wrestling team and participated in ROTC. When he graduated from Lehigh, Ernie entered the US Army as a Lieutenant and served during the Korean War in the Ordnance Corps. Ernie continued to wrestle on the Plainfield YMCA team for many years. He was also a member of the Clark VFW.

Ernie initially worked for Anheuser Busch and the Foster Wheeler Corporation, then moved to AT&T’s Bell Telephone Laboratories/Lucent Technologies where he worked as a mechanical engineer in Whippany, NJ before retiring in late 1990.

He met his wife of 47 years, Joan Blair Gonczlik at the Elizabeth YMCA’s Theater and Musical group and they were later married in Elizabeth, NJ in 1956. Ernie and Joan initially lived in Fanwood, NJ and then moved to New Providence, NJ in 1971. In the early 70’s, Ernie and several other citizens of New Providence founded a non-profit organization to provide recycling services to the community. Ernie was also a member of the Somerset Hounds for Harmony Barbershop chorus where he sang Barbershop Harmony for many years. His other passions were amateur photography, camping, travel to Europe with his wife and attending New Providence High School sporting events and Lehigh University wrestling matches.

Funeral Home:
Bradley, Brough & Dangler Funeral Home Visitation Hours:
There will be a visitation on Monday, October 7, 2019 from 4-8pm at the Bradley, Brough & Dangler Funeral Home, located at 299 Morris Avenue in Summit. Funeral:
A Service will be held at 5pm on Monday, October 7, 2019 at the funeral home, during the visitation. Committal:
Interment will be private. Memorial Gifts:
In lieu of flowers, memorials may be made to DeCorso Community Center/New Providence Senior Citizens Center, 15 E. 4th Street, New Providence, NJ 07974.