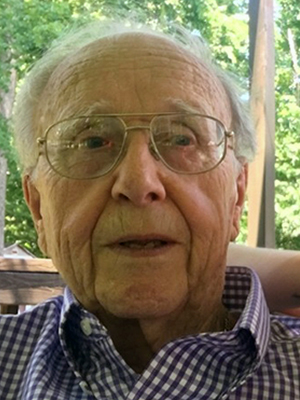 Jerry was born in Jamaica, Queens, NY to Gerald and Mary (Ford) King. He grew up in Chatham, NJ with his sister Carol. He returned to Chatham Borough to raise his own family. A Veteran of the US Army, Jerry served in Italy during WWll. Upon returning, he attended Lehigh University, graduating in 1952 with a degree in Electrical Engineering. He spent his career working for Western Electric in Newark and Kearny. Jerry was also active in the Chatham community. In addition to his volunteering as a Webelo Den Leader in BSA and a soccer coach in the borough recreation league, he was a longtime member of the Chatham Community Players through the 70’s and 80’s, as well as serving on the Chatham Board of Education for many years, including a term as president from 1974 -1976. After retiring to Mills River, NC, he became a dedicated volunteer at the NC Arboretum, putting his passion of gardening and woodworking to use in their Greenhouse and Bonsai Garden.

Funeral Services will be private. A memorial service will be held at a later date.