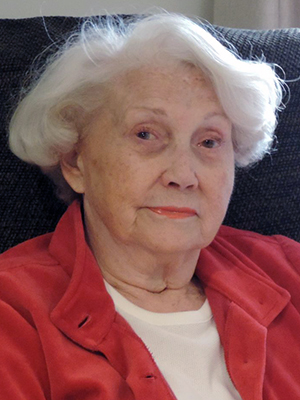 Edna May Conley passed away after a brief illness on Wednesday, December 11 2019 at Juniper Village in Chatham, New Jersey. She was 94.

Edna was born May 2, 1925 in the former East Ham borough of Essex County, England, to James Albert Rouse and Elizabeth Wall Proctor, the ninth child in a family of seven half-brothers and sisters, an older sister and a younger brother. As a teenager she sang, acted, and played the piano, and hoped for a career in show business. The stories she told of her childhood were the happiest of her life.

Her childhood ended at the age of 15 when Germany began bombing England in late summer 1940.  A young man she was fond of who lived nearby was shot down during the Battle of Britain. As her home was near the London docks and gas works the entire area was a key target for the bombers. Her father died of a stroke after being injured in a bombing attack. Edna and her younger brother John were evacuated to a farm far away from London. Edna so hated being away from home that she and her brother were quickly sent back by the farmer and his wife. A few months later her family’s home was blown up by a 500-kilogram bomb while she lay less than 100 feet away with her mother and younger brother under an Anderson shelter. The ruins were looted, so with few possessions left they moved to an older sister’s house. It too was badly damaged by bombs shortly thereafter and the family was forced to move again to another sister’s home further away.

From 1943 through the end of the war Edna worked in the War Office as secretary to the chief engineer of the Mulberry temporary port that was used to move supplies from ships to the French shore during the Normandy invasion. In the evenings she was a Red Cross volunteer at a servicemen’s club in London. There she met an American soldier, James Allison Conley. They fell in love, married in April 1945 and remained married until he died in 2008.

In February 1946 Edna crossed the Atlantic in a Liberty Ship to join her husband at his parent’s home in Cranford, New Jersey. Together they moved a total of 16 times as he pursued his career with the Federal Bureau of Investigation. While in San Francisco in the 1950s she had two sons. In 1970 she moved to McLean, Virginia where she lived for 32 years. There she worked as an executive secretary for a variety of corporations including GTE Spacenet and the National Automobile Dealers Association. Her carefully preserved Queen’s English accent and her skills at typing and the now-lost art of shorthand, were always in great demand among American executives.

In her spare time Edna was an actress with the Arlington (Virginia) Players community theater, taught herself calligraphy, and played the piano and sang, especially show tunes. After retirement she and her husband travelled extensively throughout the United States and Britain often with her sister Win and her brother-in-law Fred. She returned to England almost every other year, which she always referred to as “going home”.

Edna moved to Juniper Village in Chatham, New Jersey in 2012 to be near her son Derek and his family after she was injured in a fall. There she made many friends and was a favorite of the staff who addressed her as “British”, sometimes with a salute, always with a smile.

Edna was predeceased by her husband Jim and her son Dean. She is survived by her brother John and her son Derek, his wife Lois, her granddaughter Aleksandra and her step-granddaughter Marissa, as well as many nieces and nephews in the US, Britain, and Australia.