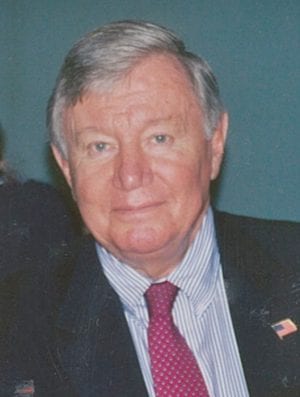 David Michael Kelly, age 82, passed away on Wednesday, January 27, 2021.  He was born in Chicago, Illinois on October 10, 1938 to Leo and Margaret (Lefevre) Kelly.  He moved to Kew Gardens, New York for a short time and then to Muskegon, Michigan.  The Kelly’s rounded out the family and Dave became the oldest of 12 children.  Dave grew up attending St. Jean’s Grade School and graduated from Muskegon Catholic High School in 1957.  He graduated with a degree in Economics from Michigan State University in 1961 where he met his beautiful wife Mary Rae Lemmon.  After graduation, Dave joined the Marine Corp Reserve where he served for 7 years.

Dave started his career at Mitchell Hutchins in Chicago, Illinois in 1962.  Dave and Rae had their three children; Mike, Robin and Kim during this time.  In 1968, Dave moved his family to Chatham, N.J. with a new job at Mitchell Hutchins, Inc. in New York City.  Several years later, he became President and Director of Execution Services, Inc., a wholly owned subsidiary of Morgan Stanley, Inc.  In 1983, he became President and CEO of National Securities Clearing Corporation (NSCC) where he pioneered many of the policies and procedures for clearing and settlements in the securities industry nationally and internationally.  Seeing the need to expand clearing services to government securities (GSCC), international securities (ISCC), and mortgage-backed securities (MBSCC), he developed separate subsidiaries under the NSCC umbrella.  Dave was active in the industry serving on over 7 boards during his lifetime.  He retired in 2000 from National Securities Clearing Corporation. After retiring, he maintained several of his board positions until 2018.

Dave was a loving husband, father, grandfather, son, brother and friend.  When Dave was not working, he loved spending time with his family and friends, traveling, golfing and he especially loved spending winters in Vero Beach, Florida.  Rae and Dave also enjoyed 50 years at their summer home in Lewes Beach, Delaware.

A Funeral Mass will be held at Corpus Christi Church in Chatham on Tuesday, February 2nd at 11am followed by interment at St. Vincent Cemetery in Madison.  Due to the pandemic and COVID restrictions, the mass can only be viewed via live stream at either the funeral home or church’s website.  For further information or to send a condolence, please visit www.bradleyfuneralhomes.com.

In lieu of flowers, donations can be made to the Dementia Society of America at dementiasociety.org/donate

Funeral Home:
Wm. A. Bradley & Son Funeral Home Funeral:
Via the live stream link above, Corpus Christi Church in Chatham on Tuesday, February 2, 2021 at 11:00am Committal:
Following Mass at St. Vincent Martyr Cemetery in Madison Memorial Gifts:
In lieu of flowers, donations can be made to the Dementia Society of America at dementiasociety.org/donate