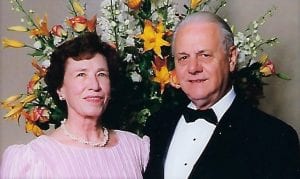 Anthony George Loreto and Tena Crisafulli Loreto of New Providence, New Jersey both passed away as a result of COVID-19. They were married for over 71 years, spent most of their lives together and were truly a remarkable couple.

Anthony G. Loreto (Tony) passed away on April 2, 2020 at the age of 95. Born in Morristown, New Jersey on March 22, 1925, he graduated from Morristown High School and enlisted in the U.S. Army Air Forces during WWII. Upon graduating from Pilot School, Anthony was assigned to the 559th Air Service Group, 316th Bombardment Wing, Eighth Air Force operating out of Kadina Army Air Base, Okinawa and later to the 301st Fighter Wing, 337th Air Service Group. As a First Lieutenant, Tony remained in service until July 4, 1947.

Tony attended Bowling Green State University in Ohio and drove 18 hours each way to see Tena Crisafulli on weekends in Newark, New Jersey while they were dating.  They were married in 1949. He obtained a bachelor’s degree in economics from Rutgers University and went on to study for a master’s degree in finance at Columbia University, which he attended part-time while working at the National Newark and Essex Bank.  Subsequently, he worked for the Summit & Elizabeth Trust Company, eventually as the Executive Vice President in charge of the Trust Department and held that position when it was named the top performing trust department in the country in 1974 by an industry rating service.  Thereafter, he joined Shearson/American Express as Senior Vice President, Financial Advisor, which evolved to become Morgan Stanley Wealth Management, where he remained active as a Senior Vice President, Financial Advisor & Senior Portfolio Manager until the time of his death.

At various times he was active on the local Board of Education, the Board of the Lyons VA Medical Center and the Bonnie Brae School for Boys, and was a member of the Bond Club of New Jersey.

Tony was a man of unwavering focus and commitment, extremely hard working, responsible, supportive and ethical. He often reached out to help those in need, whether through his professional services or just personally, and did so with little fanfare. He was an inspiration and wonderful role model to his children and grandchildren.

Tena C. Loreto passed away April 4, 2020 at the age of 94. Born in Newark, New Jersey on May 5, 1925, Tena graduated from East Side High School in 1943. Upon graduation, she worked as a secretary to the senior manager of the Robert Treat Hotel in Newark and was active in organizing events for the New Jersey Hotel Association.  She was successful and respected in her job and resigned when she had her first child to devote her full time and attention to her family.

Tena was a wonderful mother and wife and dedicated her life to her husband, children, relatives and friends.  She was kind, compassionate, generous and loving and only saw the best in everyone she met.  Where Tony was focused on his work, Tena was the lynchpin of the family and provided the perfect counterbalance.  She loved meeting people and traveling to new places.

Tena volunteered at Morristown Memorial Hospital and the Morris Museum in Morristown, New Jersey.  Tena pursued her interests by studying Italian and Art at the County College of Morris and Fairleigh Dickinson University.

Anthony George Loreto and Tena Crisafulli Loreto are survived by their son, G. Mark Loreto, daughter-in-law Ingrid Periz, their daughters, Lisa Mary Loreto and Lynn Loreto Hancock, six grandchildren and one great granddaughter.  Tony is survived by his sisters Grace Miller and Mary Tracey. He was predeceased by his parents George and Maria Loreto, sisters Philomena Campbell and Ann Brennan.  Tena was predeceased by her parents, Joseph and Lena Crisafulli, and her brothers John, Louis and Frank and sister Mary.  They were predeceased by their granddaughter Jillian Lee Loreto.