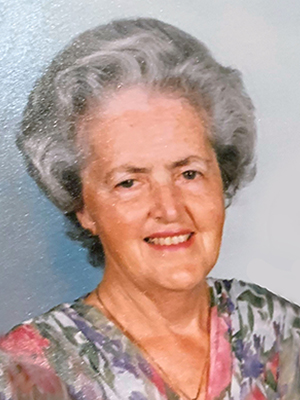 Annetta Mary (McDonald) Murphy, 95 of Summit, New Jersey and Ft. Myers Beach Florida died on October 25, 2019. Devoted wife to John Edward Murphy, Jr. and loving mother to ten children- John, Kevin, Thomas, Raymond, Terrence, Margaret, Stephen, William, Robert and Harold- Annetta was born March 2, 1924, the seventh of ten children, to Wallace and Cora McDonald of Chapeau, Quebec. A small hamlet situated on the shores of the Ottawa River, Chapeau embodied the backdrop- the river below the village, the church of St. Alphonsus above, Papa’s general store and home itself- of her youth. Chapeau’s intimacy and interdependence, along with her family’s dedication to church and service to others, would inform Annetta’s future course and remain her true north.

Annetta was educated at St. Alphonsus, Chapeau and at Notre Dame Convent in Ottawa. She entered nursing training at Hotel Dieu Hospital, Kingston Ontario in 1942 and graduated in 1945. As a traveling nurse, she served in Pembroke, Toronto, Peterborough, Kingston, Anchorage, Santa Monica, and finally St. Petersburg, Florida. While in St. Petersburg, Annetta met her future husband John. Appropriately, their first date occurred at a local St. Petersburg church for Christmas Eve mass. They married on August 23, 1952 and settled in Summit, New Jersey. Their marriage became a partnership primarily focused on healthcare and based on faith, trust and unconditional love.

During their early years, to make ends meet, Anne and John provided room and board and nursing care to seniors in their home while Anne also worked as a registered nurse at Overlook Hospital. Meanwhile, as parishioners of St. Teresa of Avila Church, the couple nurtured valued and long lasting friendships in their years in Summit. As the family grew, Anne and John bought the Beverwyck Nursing Home in Parsippany, New Jersey and operated it for 17 years. Serving as head nurse and co-administrator and working in all capacities, Anne’s personalized care to patients became the foundation of a successful business.

Anne and John also invested in real estate over a period of three decades. In 1966 they developed the Coquina Club Condominium in Naples, Florida and in 1973 they formed their own real estate company, JEMAAM, and constructed a condominium in Fort Myers Beach that Anne named Island’s End. The couple eventually retired there and continued as eager participants in the growth and welfare of their children, 16 grandchildren and 6 great grandchildren. As in Summit, they easily maintained friendships in Florida and remained active in the local church. The partnership of Anne and John was defined by a steady progression towards goals attained through endurance, patience, and sacrifice. A true love story, their mutual loyalty never diminished in 67 years of marriage.

Faith and family were integrally related and central to Anne’s life. Her unwavering faith conquered the challenges inherent in raising a large family and attending to the needs of others. She always extended her natural human touch, putting the needs of others- family, friends, and even strangers- before her own.

Family and friends of Anne are invited to join John and their children to her wake on October 29, 4-8 PM at Bradley, Brough and Dangler Funeral Home, 299 Morris Avenue, Summit, NJ, and her funeral mass on October 30, 10:45 AM at St. Teresa of Avila Church, 306 Morris Avenue, with burial to follow at St. Teresa Cemetery, 136 Passaic Avenue, Summit.