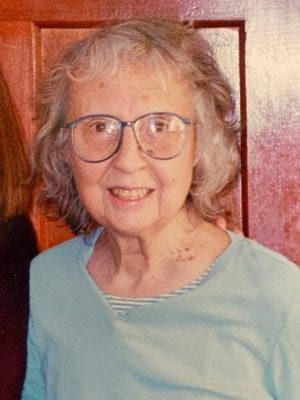 Loved Madison, Words, the Arts and the Mets

Anne Marie McMains, a longtime resident of Madison who embraced the borough as her adoptive hometown, died Jan. 29 of congestive heart failure at Morristown Medical Center. She was 84.

Anne moved to Madison in 2005, after selling her home of 37 years in Morris Plains, and befriended shopkeepers, restaurant owners and bank tellers there and in neighboring Chatham Township. Her hangouts included Quick Check, Madison Library, Madison Plaza Laundromat, the Smoke Shop, La Rosa Chicken and Grill, Nicky’s Firehouse, Chatham Booksellers, Chase and the Dunkin’ in the Hickory Square center in Chatham. She loved engaging with the people behind the counters and living in a small town with a rich history.

Anne was innately curious and a wordsmith – traits that she instilled in her children as they went on to pursue careers in the media. Her love of words and ideas sparked a lifelong passion for Shakespeare, The New Yorker and crossword puzzles in The New York Times.

Anne loved the arts, especially music, movies, theater, paintings and illustrations. She fondly recalled attending Broadway musicals with her mother as a teenager in the 1950s, and concerts with her son as an adult, including Bob Dylan and Paul Simon at Jones Beach Theater on Long Island. Equally exciting to Anne was seeing her daughter act in plays at the Morristown-Beard School and her son play percussion in concerts at Whippany Park High School. Paintings and lithographs enlivened the walls of her homes, including a large mock postage stamp honoring her that her husband – an illustrator and art designer – created as a 40th birthday present in the bicentennial year of 1976. It featured an image of Anne on a flag backdrop and the inscription, “American Patriot, Humanitarian, Political Activist, Wife and Mother and Know-it-all.”

Anne also loved baseball and was a longtime fan of the New York Mets and vocal supporter of her son’s teams in the Hanover Township Little League, including Guy’s Pizza, Foodtown and Community Lumber. She periodically attended Mets games but mostly followed the team on TV, where she became a devotee of announcers such as Tim McCarver, Keith Hernandez and Ralph Kiner, the genial Hall-of-Famer prone to malapropisms, with whom Anne shared the hometown of Alhambra, Calif.

Anne was born July 26, 1936 in Los Angeles, to Herbert Louis Walthart and Mary Helen Van Vleet. The Waltharts moved from Alhambra to Maplewood, N.J. in 1948, taking a train cross-country with memorable stops along the way, including Union Station in Chicago.

Anne graduated from Columbia High School in Maplewood in 1954 and attended Western College for Women in Oxford, Ohio, where she earned a bachelor’s in history in 1958 and made lifelong friends. After college, she set sail for a summer group tour across Europe and afterward lived in Greenwich Village in New York City, where she worked as a clerk at Newsweek and met her future husband, illustrator Denny McMains. They were married May 14, 1960 at the Church of the Transfiguration, with a reception at Tavern on the Green, followed by a honeymoon in Cape Cod.

Anne and Denny lived on Central Park West and in New Hope, Pa. and Kendall Park, N.J. before settling in Morris Plains in 1968, when Denny joined the art department of Silver Burdett, a textbook publisher in Morristown.

Anne will be buried next to her husband at Evergreen Cemetery in Morristown. A celebration of her life is planned for later in the year, when it can be held more safely with COVID protocols.

Funeral Home:
Bradley-Braviak Funeral Home Funeral:
A celebration of her life is planned for later in the year, when it can be held more safely with COVID protocols Committal:
Anne will be buried next to her husband at Evergreen Cemetery in Morristown Memorial Gifts:
As a supporter of larger causes, Anne contributed annually to a host of organizations, including the World Wildlife Fund, Brady Campaign, National Resources Defense Council, Emily’s List, The Seeing Eye, American Heart Association, Friends of the Madison Library, UNICEF, Madison Area YMCA, Public Citizen, National Park Foundation, Jane Goodall Institute and Democratic National Committee. She would encourage you to do the same.