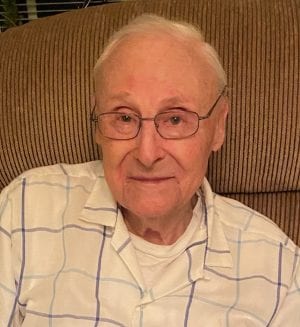 André Oscar Herssens of Short Hills New Jersey passed away peacefully at the age of 92, on Tuesday October 27, 2020.

André was born in Ostende, Belgium on January 4, 1928. He went to England as a refugee during World War II. After his return, he attended the Merchant Marine Academy and went on to a career in cargo shipping for Belgian and Dart container Lines, traveling to many destinations across the globe including Canada, South America, Europe, Asia and Africa. He attained his promotion to Captain in 1957. In 1954 he married Liliane Léonard. They continued to live in Belgium until 1967, when André, Liliane and their three children, Walter, Patrick and Christine moved to the United States. Shortly thereafter, their youngest daughter Nancy was born.

Retired as a Ship Captain, André remained in the cargo shipping business as Senior Vice President of Operations at Global Terminals in Port Newark New Jersey. Now living in Short Hills since 1969, Andre and Liliane ran a “tight ship” raising their family. They continued living in the same house in Short Hills until their last days.

We are thankful to our father for the opportunity he provided our family by moving to the United States and his opportunity to see us succeed.   His exterior was tough but that was to protect his heart which was soft.

He is reunited with his beloved wife Liliane Léonard Herssens the love of his life whom he was married to for 66 years.